The sulfur market is expected to grow at a CAGR of around 3% during the forecast period 2021 to 2030 and is expected to reach US$ 17.13 billion by 2030 from USD 12.75 billion in 2020. This research report evaluates the sulfur market on a global and regional level. It offers a thorough analysis of the market revenue status, growth, future trends, and forecast of the global sulfur market for the period from 2017 to 2030.

Sulfur is solid non-metal having chemical symbol ‘S’. Naturally occurring sulfur is pale yellow in color and poor conductor of heat. Additionally, it is insoluble in the water and exists in two major crystalline forms including monoclinic sulfur and rhombic sulfur. It is odorless, colorless element with less conductor of electricity. Sulfur primarily occurs in the solid state typically at the 20°C and is the widely used chemical in commercial sectors. Sulfur is used as basic raw material in the manufacturing of match sticks, fungicides, insecticides, detergents, batteries, and black gunpowder. Sulfur plays vital role in the vulcanization of black rubber. Sulfur dioxide as well as sulfuric acids is also produced from the sulfur. The demand for the sulfur is growing across the globe in order to produce fertilizers. Key fertilizer which is used in preventing soil erosion as well as nutrient runoff is calcium sulfate, which is broadly produced from sulfur. However, it can effect on human health such as behavioral changes, heart damage, and neurological effects, among others. 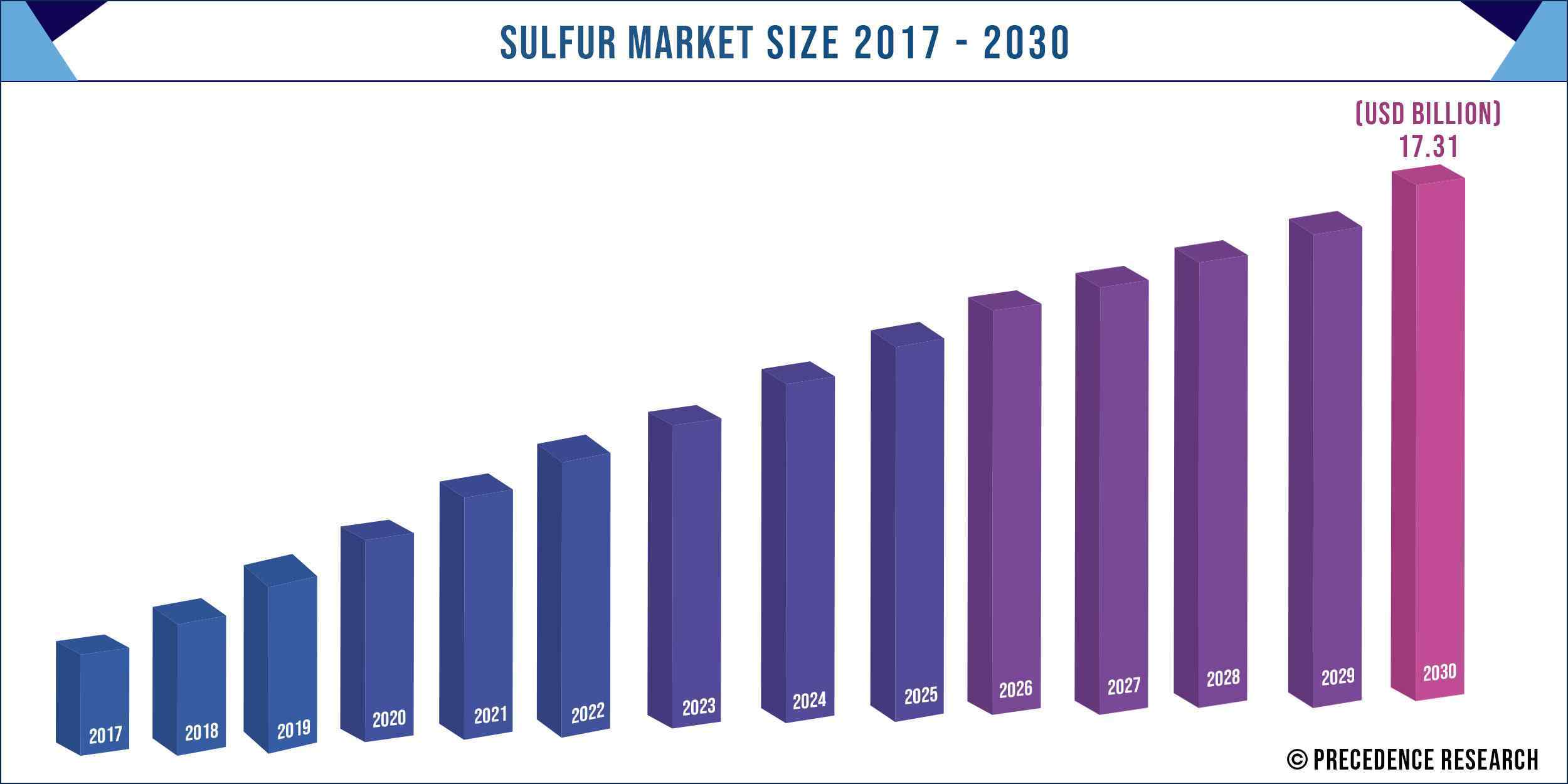 Increasing adoption of the sulfur in agriculture industry for the manufacturing of fertilizers is major factor driving growth of the global sulfur market. In addition to this, growing demand for the sulfur based chemical elements in the commercial industries including pharmaceutical, chemical, and rubber industry is anticipated to fuel growth of the target industry over the forecast period. Calcium sulphate is fertilizer know to prevent the soil erosion and sulfur is largely used in the production of calcium sulphate owing to its cost-effectiveness. This is among major factors projected to augment growth of the global market in the next few years. However, harmful effects to the sulfur on human health, coupled with high costs associated with extraction of sulfur are expected to hinder growth of the target market during the forecast time frame. Nevertheless, emerging applications of sulfur is anticipated to create potential opportunities for the growth of the target market. Countries in the Asia Pacific region are focusing on the agricultural growth and intern the demand and production of the sulfur is anticipated to increase in the near future and boost the market growth in the near future.

The industrial report mentions the influence of the ongoing COVID-19 pandemic. The outbreak has caused disturbances in several industries and has hammered the logistics, resulting in delayed deliveries and cancellation of product demand. The sulfur report proficiently explains the resulting factors and concerns of manufacturers. Researchers have also well-explained how the producers and providers will tackle the ongoing epidemic and the key strategies to be adopted post-pandemic for turning their businesses back to normal.

The report covers data for North America, Europe, Asia Pacific, Latin America, and Middle East and Africa. In 2020, Asia Pacific dominated the global market with a market share of more than 30%. Chin is presented the highest share in the Asia Pacific region primarily due to increasing energy production, along with the favorable government policies for the sulfur production in the region. Further increasing adoption of sulfur based fertilizers and presence of key companies in the country are other important factors to contribute the high market share of the Asia Pacific over the forecast period. Further North America is an important market in the sulfur.

The growth of the sulfur industry in the countries of the North America is attributed to growing adoption of the sulfurs in the various end use applications such as phosphate fertilizers, various chemical elements, and rubber, among others in the United States and Canada. North America anticipated growing at the maximum CAGR in the forecast period due increasing investments in agricultural activities, coupled with rising production of vulcanized rubber in the countries of the region especially in the United States. Also, increased deficiency of the sulfur, in the soils is another factor expected to fuel growth of the sulfur industry in the developed as well as emerging economies across the globe. Further, strict regulations by the regulatory bodies for the sulfur emission regulations can have positive impact on the target industry growth in the future. Latin America and the African and Middle Eastern region will show perceptible growth over the forecast period owing to growing preferences for the production of high-quality crops in the regions.

Why should you invest in this report?

If you are aiming to enter the global sulfur market, this report is a comprehensive guide that provides crystal clear insights into this niche market. All the major application areas for sulfur are covered in this report and information is given on the important regions of the world where this market is likely to boom during the forecast period of 2021-2030 so that you can plan your strategies to enter this market accordingly.

Besides, through this report, you can have a complete grasp of the level of competition you will be facing in this hugely competitive market and if you are an established player in this market already, this report will help you gauge the strategies that your competitors have adopted to stay as market leaders in this market. For new entrants to this market, the voluminous data provided in this report is invaluable.

Precedence Research is a worldwide market research and consulting organization. We give unmatched nature of offering to our customers present all around the globe across industry verticals. Precedence Research has expertise in giving deep-dive market insight along with market intelligence to our customers spread crosswise over various undertakings. We are obliged to serve our different client base present over the enterprises of medicinal services, healthcare, innovation, next-gen technologies, semi-conductors, chemicals, automotive, and among different ventures present globally.

View all posts by Flair Insight →

Flow Computers Market Size Valuation Will Reach to US$ 2.1 Billion by 2027